What is the easiest way to correct multiple cables between the powermeter and the calibration jig?

Discussion and questions regarding the Radiated Immunity and Conducted Immunity modules of RadiMation.
Post Reply
2 posts • Page 1 of 1

What is the easiest way to correct multiple cables between the powermeter and the calibration jig?

In our calibration setup for the Conducted immunity IEC 61000-4-6, we have multiple cables between the calibration jig and the analyzer that we are using to measure the injected voltage level.
At present I am having to combine all 5 transduced factors into one for the “Power Correction” when using the addressing the Sensor Power Meter (Spectrum Analyser).

In order to achieve the desired test severity level, do all the factors related to the monitoring (i.e. 40dB attenuator, cable 21, cable21a, cable701 and 30dB attenuator) need to be combined into one factor file and inserted in the “Power Correction” tab at the bottom of the Sensor power meter or is there another way of doing this?

As you can see from the image below we are using a Spectrum Analyser instead of a Sensor Power Meter, however there are more than one correction file we need to consider. They include the 40dB attenuator and Cable#06 outside the shielded enclosure and cables #21 &#21a along with a 30dB attenuator inside the shielded enclosure.
It would be ideal if RadiMation could simply add additional correction files within the Correction file tab, however it appears that I can only add one factor file, hence why I have combined all the factor files together into a single file name.
How would you best recommend I address this issue? 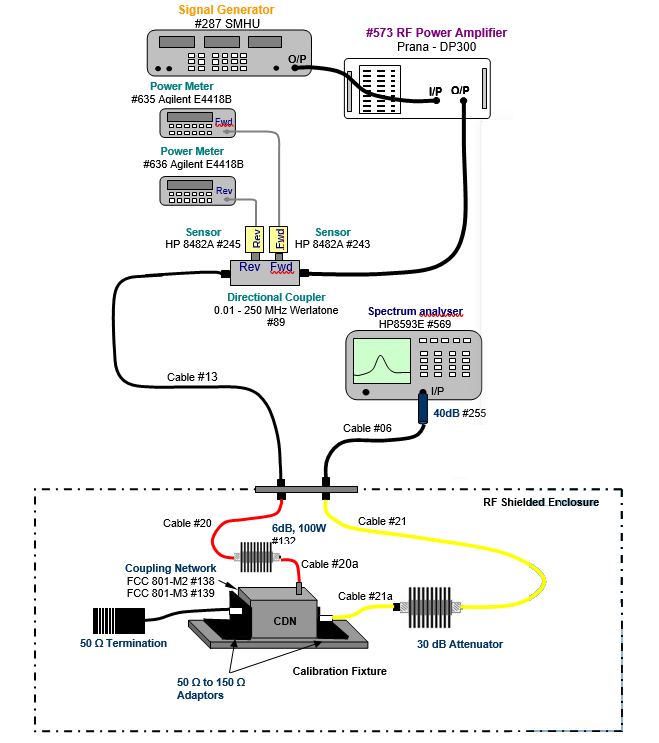 Re: What is the easiest way to correct multiple cables between the powermeter and the calibration jig?

It indeed can happen that a connection between two devices is not a single cable, but consists of multiple cables and attenuators.
You describe that you are now manually calculating and creating a single correction file that contains the total of all the added individual attenuations of all the separate cables.

There is however a simpler and easier solution. Also see the picture of the testsite setup of a Conducted Immunity system calibration in our manual ( https://wiki.radimation.com/wiki/index. ... alibration )

The test equipment setup that is used by RadiMation for a Conducted Immunity System calibration
Conducted_Immunity_Test_Setup_Calibration.png (73.41 KiB) Viewed 59 times

This is valid for all the cables that can be selected. Your complete setup as it is shown in your drawing can thus be configured in the Test Equipment as: 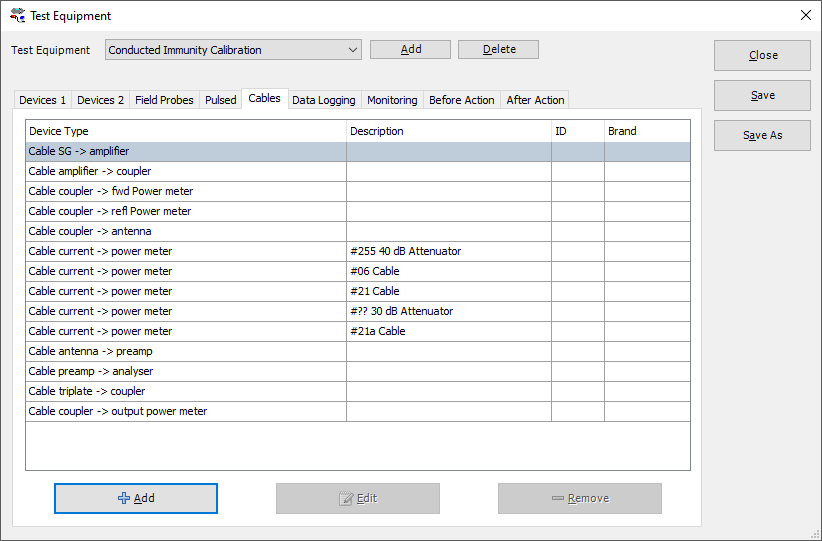 Side note: The cables #13, #20, #12 and #20a can of course also be included in the Test Equipment configuration for documentation. However it is not necessary to include those cables, as those cables are part of the setup that is calibrated. You only have to ensure that the same cables are also used during the substitution test.

It may be necessary to create a 'Cable' device driver for each of the cables. In those device drivers the correction file of that cable can be selected for the 'Cable Loss' correction. 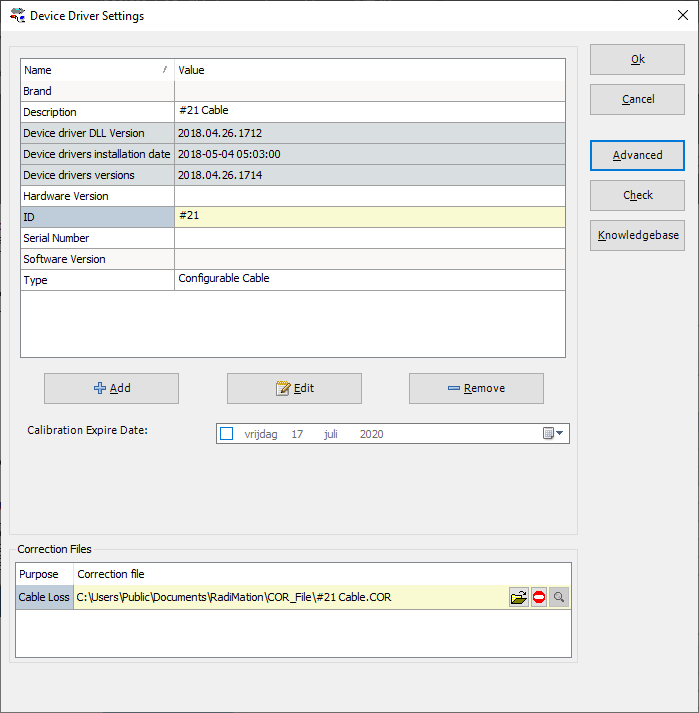 With this configuration it is possible to use a single correction file for each cable, and no manual calculation of the combined attenuation is needed. It also is much easier to switch cables in the future, as this can be achieved by removing one cable from the list of the selected cables in the Test Equpment, and adding another cable device driver.
Top
Post Reply
2 posts • Page 1 of 1